WSJ Changes in wages since September 2010 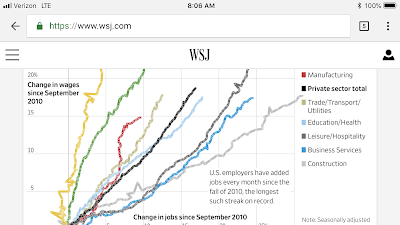 11-point checklist to prepare for combat

1.     Analyze the mission.
2.     Identify personnel, assets, resources, and time available.
3.     Decentralize the planning process.
4.     Determine a specific course of action.
5.     Empower key leaders to develop the plan for the selected course of action.
6.     Plan for likely contingencies through each phase of the operation.
7.     Mitigate risks that can be controlled as much as possible.
8.     Delegate portions of the plan and brief to key junior leaders.
9.     Continually check and question the plan against emerging information to ensure it still fits the situation.
10. Brief the plan to all participants and supporting assets.
11. Conduct post-operational debrief after execution.
Posted by W. DOUGLAS BLACKBURN, Jr. at 9:03 AM No comments:

(Bloomberg) -- Douglas Blackburn has been crawling in and out of the coal mines of Central Appalachia since he was a boy accompanying his father and grandfather some 50 years ago.

The only time that Blackburn, now a coal industry consultant, remembers things being this bad was in the 1990s. Back then, he estimates, almost 40 percent of the region’s mines went bankrupt.

Now, like then, the principal problem is sinking coal prices. They’ve dropped 33 percent over the past four years to levels that have made most mining companies across the Appalachia mountain region unprofitable.

To make matters worse, there’s little chance of a quick rebound in prices. That’s because idling a mine to cut output and stem losses isn’t an option for many companies. The cost of doing so -- even on a temporary basis -- has become so prohibitive that it can put a miner out of business fast, Blackburn and other industry analysts say.

So companies keep pulling coal out of the ground, opting to take a small, steady loss rather than one big writedown, in the hope that prices will bounce back. That, of course, is only adding to the supply glut in the U.S., the world’s second-biggest producer, and driving prices down further.

It’s become, in essence, a trap for miners.

“You have this really perverse situation where they keep producing,” James Stevenson, director of North American thermal coal at IHS Inc. in Houston, said in a telephone interview. “You’re just shoveling coal into this market that’s oversupplied.”

Companies will dig up at least 17 million tons more coal than power plants need this year, Morgan Stanley estimates. Coal is burned at the plants to generate electricity. That’s creating the latest fossil fuel glut in the U.S., joining oil and natural gas.

The fuel’s share of the electricity market has dropped to 37 percent from about half in 2007, government data show. The industry is bracing itself for the shutdown of coal-burning power plants that can’t meet new clean air rules.

A year ago, exports and higher natural gas prices offered some hope. Now, a strong dollar makes U.S. coal too expensive for overseas buyers and an oversupply of shale gas is stealing domestic market share. Benchmark European and Australian prices are the lowest since 2007. Prices in the U.S. will average $52.32 a ton this year, down 9.1 percent from $57.54 in 2014, based on the median of seven analyst estimates compiled by Bloomberg.

Central Appalachia coal has fallen four straight years on the New York Mercantile Exchange. Even after a rally in February, prices are the lowest for this time of year since 2009. Meanwhile, gas is at the second-lowest seasonal level in the past decade.

About 72 percent of coal from West Virginia, Kentucky and Virginia, the states that make up Central Appalachia, is mined at a loss.

It’s partly the result of a 1977 law that requires companies to reclaim closed mine sites. That includes restoring grasslands, removing waste water and sealing the mine shafts.

So while a 4 million-ton-a-year mine in Central Appalachia, which has the nation’s highest coal costs, may lose $15 on every ton, the one-time expense to permanently close it could reach as much as $44 million, according to Wood Mackenzie Ltd.

Alpha Natural Resources Inc., the second-biggest U.S. coal producer by sales, told investors Feb. 26 that it had $640.5 million in liabilities associated with closing the mines. That’s almost three times as much as the company is worth.

Temporarily closing an operation doesn’t provide much relief, Seth Schwartz, president of Energy Ventures Analysis Inc., an Arlington, Virginia-based energy industry consultant, said March 2 by phone. Equipment has to be maintained and workers have to make sure the roof doesn’t cave in, the mine is ventilated and that water is pumped out, he said.

It’s also difficult to obtain government permits to restart idled operations, said Blackburn. The companies have to keep making interest payments on their debt to avoid bankruptcy, so even if they’re selling at a loss, they can get some cash, he said.

Blackburn, whose clients include banks, utilities and the federal government, said that companies are apt to mine coal until they’re driven to bankruptcy, holding on to optimism that another company will shut down first.

In the meantime the glut deepens. Utilities are on track to end 2015 with 188 million tons of coal in reserve, 27 percent higher last year, Morgan Stanley estimates.

“You have all these deferred decisions and it just keeps the price low,” Blackburn said in a thick Appalachia drawl. “What’s expensive is that you’ve walked away from your investment.”